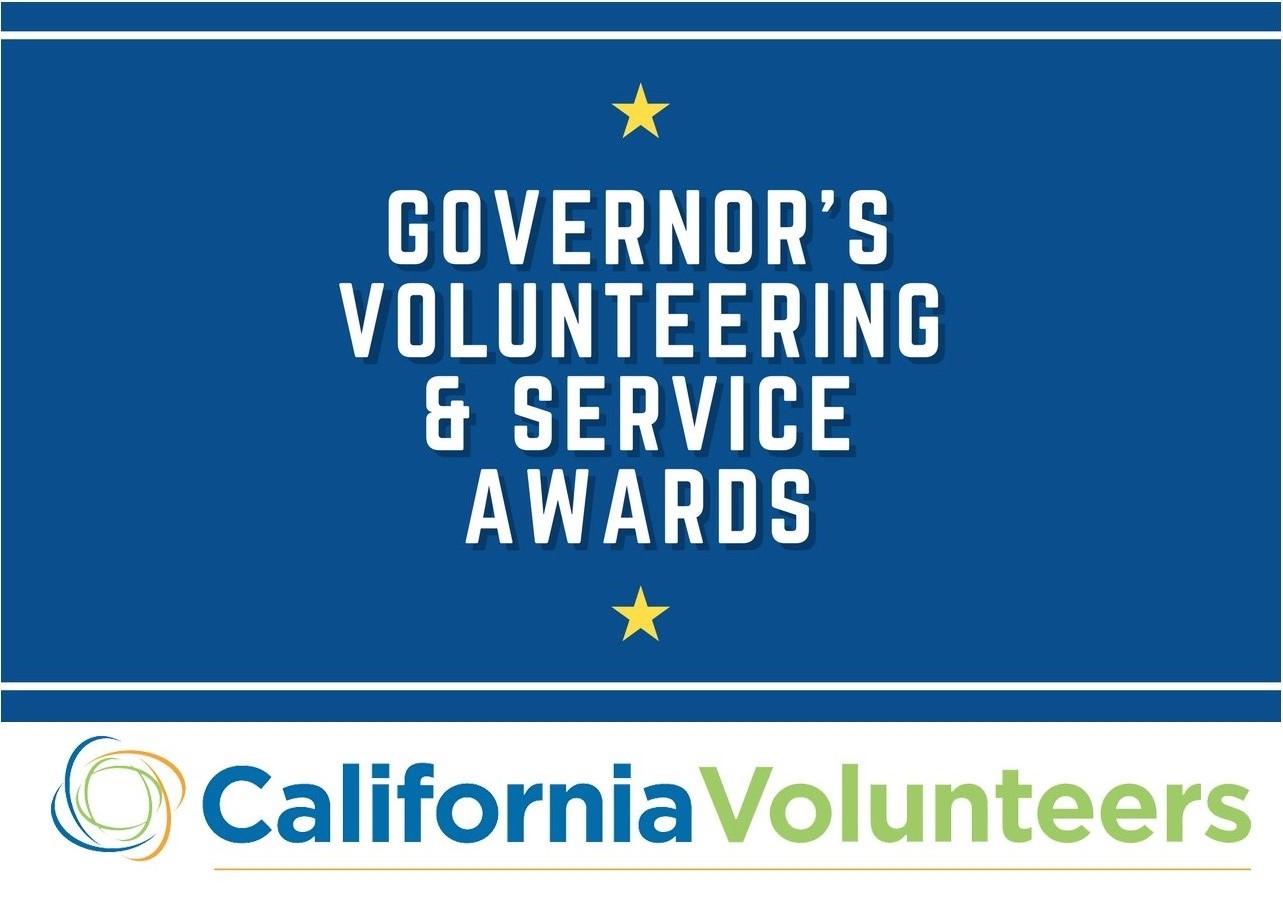 Sacramento, CA – Yesterday, May 2, 2017, California presented the 2017 Governor’s Volunteering and Service Awards and the Hoffman Prize to honorees that exemplify what it means to go above and beyond in the world of service and volunteerism.

Chief Service Officer Karen Baker presented the awards to the honorees in the Governor’s Council Room in the State Capitol in Sacramento.

“These dedicated men and women are purpose-driven and passionate about making their communities stronger,” said Karen Baker, California’s Chief Service Officer.  “We are so honored to be able to present these awards to the best of the best in service and volunteerism.”

The 2017 Governor’s Volunteering and Service Award winners and the Hoffman Prize winner are as follows:

Hoffman Prize – Diane Solinger, Director of Googler Engagement, Google
The Hoffman Prize recognizes an exceptional California business executive who demonstrates outstanding and impactful work fostering volunteerism in his or her local community, the State of California, the nation, and the globe. Diane Solinger and her team are dedicated to helping Googlers volunteer and give around the globe with particular emphasis on aligning Googlers skills with Google.org investments.  She manages a giving budget of over $50 million annually, which is leveraged to support Googlers interests in philanthropic giving and volunteering.  Programs range from team building through GoogleServe Month of Service, to pro bono work such as working alongside Google.org grantees, to board service, where she placed over 200 Googlers on nonprofit boards. Diane is a founding member of Impact 2030 and helped to create the organization’s charter.   She is also involved with the Global Corporate Volunteer Council for the International Association of Volunteer Effort, speaking at conferences around the world, as well as hosting regional meetings to encourage more collaboration between companies in their volunteering efforts. Diane has led Googler volunteering and giving to grow from 32 percent to more than 60 percent as the company’s employee base has grown from 32,000 to more than 70,000.  More than 200,000 volunteer hours are logged annually.

California’s Volunteer of the Year – Jack Russi, San Francisco
This award honors an outstanding Californian whose volunteer service is exemplary and inspirational.  The Jefferson Awards Foundation has been a part of the San Francisco Bay Area for the last 10 years and has honored over 500 outstanding individuals in their community, in large part to Jack Russi’s strong commitment to service. The Jefferson Awards Foundation’s mission is to empower others to have maximum impact on the things they care most about.  Jack, working with Deloitte, was also instrumental in creating the Jefferson Award’s Students in Action (SIA) program, with the goal of multiplying service and civic engagement in high schools and in the process, creating better education and job outcomes. He helped introduce SIA to 50 Bay Area high schools and over 500 nationally. To date, 2,000 youth in the Bay Area have been trained to be service leaders and have generated over two million volunteer hours and raised almost $2 million to invest in socially critical issues.  Jack co-founded and co-chairs Inner City Advisors/Fund Good Jobs, which helps to grow inner city businesses and create jobs for those who need them most.  Jack is also a Board member at Ronnie Lott’s All Stars Helping Kids assisting in funding start-up nonprofits focused on helping disadvantaged youth and is the Chair of the Haas School of Business Advisory Board.

Catherine Milton California AmeriCorps Member of the Year – Oniric Cirino, also known as Alice Kellogg, San Diego NAMI (VIP Service Enterprise)
This award honors a California AmeriCorps member who has made a substantial impact to their community.   Alice’s accomplishments have been instrumental in growing volunteerism at the nonprofit, National Alliance on Mental Health (NAMI) San Diego. Notably, she coordinated presentations in middle schools and high schools throughout San Diego to educate young people about mental illness and provided resources to more than 6,400 students, many of whom went on to become volunteers. She also writes a volunteer spotlight article for the monthly NAMI San Diego Newsletter. Alice is instrumental in developing opportunities for volunteers to have a voice and a platform to share their personal journeys in a nonjudgmental environment and utilize their strengths to gain confidence and champion breaking the stigma on mental illness.

California’s Governmental Agency of the Year – California Department of Corrections and Rehabilitation
This award honors an outstanding state, county, or city agency or department that has demonstrated a remarkable dedication to engaging volunteers.  Led by Secretary Scott Kernan, CDCR has enthusiastically demonstrated their commitment to growing their volunteer footprint at the 35 state prisons. Examples of their innovations include producing a video for Correctional Officers and volunteers to better understand the importance of volunteer work within the prisons, organizing a statewide Volunteer Advisory Board, and growing volunteer-based rehabilitation programs.

California’s Disaster Volunteer Program of the Year – AmeriCorps NCCC (National Civilian Community Corps, Pacific Campus)
This award honors an outstanding California disaster volunteer program that has demonstrated an unwavering service commitment to the local community. During the Oroville Spillway evacuation incident, CaliforniaVolunteers reached out to the Pacific Region NCCC Campus to support shelter operations at the American Red Cross Shelter, established at the Silver Dollar Fairgrounds in Chico.  The first team of 13 NCCC team members arrived just hours after the shelter was opened.  Additional NCCC teams arrived to assist throughout the time that the shelter was opened.  In all, 43 NCCC team members assisted shelter operations in Chico with the last team leaving when the shelter was closed nearly two weeks later.  While working at the shelter, the members assisted with meal service and cleaning duties, as well as setting up sleeping space for evacuees.  They also acted as security and helped with all duties involved in closing the shelter.

California’s Nonprofit of the Year – Sacramento Children’s Home
This award honors a California nonprofit that has shown an extraordinary ability to leverage volunteers in service to their organization.  Celebrating their 150th Anniversary, the Sacramento Children’s Home has been dedicated to caring for their community’s most vulnerable children and families. Their mission could not be accomplished without the help of their generous donors and volunteers. From educating parents of infants and toddlers to teaching independent living skills to young adults, they are able to help the widest range of clients and address the widest range of needs of any child and family service organization in the county. Last year, volunteers served nearly 7,000 children and more than 4,600 families, focusing on building strong families and ending the generational cycle of abuse and neglect.

California’s Foundation of the Year – Dolores Huerta Foundation
This award honors a California-based foundation that has made a successful investment in service and volunteering models while addressing community needs. The Dolores Huerta Foundation is a multi-issue community driven organization that addresses the most pressing issues that Central Valley residents continue to face.  Through hands on leadership opportunities, community members learn how to develop campaigns, engage local stakeholders, and work with their neighbors to advocate for change.  Through its Vecinos Unidos (United Neighbors) program, the Dolores Huerta Foundation uses a grassroots community organizing model that empowers residents to determine and prioritize community needs, trains them to speak directly with public officials, and provides them with a platform to advocate for desired changes. Their organizers work with community members to host and organize monthly community forums in which a variety of topics are covered: immigration, health reform, and education.  Intersectionality is core to the foundation’s training model addressing injustices that are intrinsically linked.  In 2010, the Dolores Huerta Foundation launched the Weaving Movements campaign to promote working across silos.  They are also a leader in a wide range of education, civic engagement, and civil rights coalitions in low-income communities in Kern and Tulare counties and statewide. The Dolores Huerta Foundation is connecting its groundbreaking community-based organizing to state and national movements to register and educate voters; advocate for education reform; bring about infrastructure improvements in long-neglected communities; advocate for greater equality for the lesbian, gay, bisexual, and transgender community; and create a strong leadership development pipeline.

California’s Business Volunteer Program of the Year – San Francisco Giants
This award honors an outstanding California business with an innovative, high-impact volunteer program that exemplifies collectively giving back to the community.  In a collaborative effort, the Giants Community Fund, the club’s 501(c)(3) non-profit, and the team’s Community Relations Department, work to identify, develop, support and raise awareness for people, issues and programs that are important to fans and communities throughout the Bay Area and Northern and Central California. The Giants’ work in the community translates into a variety of unique and progressive programs dedicated to addressing some of the most pressing needs of Northern California children and their families, including health, violence prevention, youth fitness and recreation, education and literacy.  Each season, the Giants hold more than 375 community outreach and awareness programs and events. In addition, thousands of community organizations and groups gather at AT&T Park each season to celebrate their shared culture, heritage, and diversity while raising funds to support their school, organization or non-profit, including Girls Day, Bullying Prevention, and Step Up to the Plate for Homelessness. The Giants Community Fund’s flagship program, Junior Giants, serves nearly 25,000 boys and girls in 90 underserved communities throughout northern and central California and southern Oregon.  It is a free and non-competitive baseball program that has served as a model for MLB youth initiatives.  Using baseball as the hook, Junior Giants provides opportunities for children to learn the meaning of leadership, teamwork, confidence and integrity, as well as the importance of education, health and bullying prevention. Over 6,000 coaches, team parents and representatives of community organizations, generously dedicate their time and efforts to improve the lives of Junior Giants in their communities.  Giants employees, from the players to the front office staff are expected to give back to the community.

Service Spotlight Award – Rita Holiday, Intel Corporation, Silicon Valley
This award honors a group or individual who has uniquely met a community need with the power of service.  Rita Holiday and Intel know volunteering builds goodwill and good business. Their global corporate volunteer program—Intel Involved—identifies worthwhile opportunities for individual volunteers and team projects, as well as days of community service.  Intel employees make a difference around the globe by helping educate and train people of all ages. They advance initiatives to foster safe and healthy communities and use their technical knowledge to support endeavors where it is most needed. Intel has made an innovative connection with philanthropy linked to volunteering.  When Intel employees commit hours, Intel commits dollars. The “Intel Involved” Matching Grant program awards cash grants to eligible organizations based on the number of hours that Intel employees volunteer. After a minimum of 20 hours has been accrued by Intel employees volunteering at a school or qualified nonprofit organization, a donation or “match” of $10 per hour volunteered will be triggered from the Intel Foundation with a maximum of $15,000 for schools, and $10,000 for other nonprofits, per eligible organization per year.  In 2016 alone, volunteer hours in California totaled more than 305,000 hours.